In May 2015, the City of Toronto and Urbancorp breached their obligations under a contract with TMAC. We sued both parties for the right to purchase the arts space as agreed.

Our only demand is that the City of Toronto deliver on the promises it made to this community. Nothing more, nothing less.

Despite its responsibility to protect this unique Section 37 benefit, the City has interfered and refused to act in the interest of the community for over 6 years — putting the security of vital media artists and nonprofits in jeopardy.

TMAC was unable to raise the funds required by the Minutes of Settlement.

The mediation originally planned for spring has a new date. We look forward to a judge reviewing our materials so that we can put this fight behind us so we can devote all of our resources to this community.

TMAC and the City agree to enter judicial mediation over the City’s interference with the adjudication of our settlement materials. However, due to court closures related to the global pandemic, this date was postponed. We expect a rescheduled mediation date before the end of 2020.

The community questioned Councillor Bailao about whether she now supports TMAC, considering its years of successful operations. She responded that the most important thing is that the space is operated as a media arts centre, and that she didn’t know anything about the legal machinations underway.

We also delivered her 400+ letters from community members asking the City to stop fighting TMAC.

City and TMAC lawyers cross-examine opposing parties – Sally Han (for the City of Toronto) and Henry Faber (for TMAC). The City maintains its position that TMAC has no right to the space and has demonstrated no ability to operate it.

TMAC files a motion to the court to hold the City to the reasonable conditions it agreed to in our January meeting – that funds raised could be conditional on closing.

Despite TMAC’s successful fundraising, and its compliance with the terms agreed to at the meeting on January 16, 2019, the City claims that TMAC should have no further rights to the space.

TMAC exceeds its obligations under the terms of the amended Minutes of Settlement by securing sponsorships totalling $2.285 million.

We also celebrated the 1-year anniversary of moving in to our space, and launched our second year of artistic and community programming.

Consent to sever the “Additional Arts & Culture Space” from TMAC is granted by the committee of adjustment and no appeal is filed by the deadline.

The City of Toronto proposes (and TMAC accepts) a 6-month extension to the deadline in the MoS, as the City does not control the timeline for the conveyance of title.

TMAC accepts City’s offer of settlement, which gives us the right to occupy the space on an interim basis while litigation is resolved

TMAC and the City of Toronto sign a settlement agreement intended to resolve the legal dispute over the TMAC space at 36 Lisgar.

TMAC files motion for an injunction for temporary occupancy of the space while we continue negotiating the settlement, as leases at our member org spaces are expiring. Court date set for Jan. 17, 2018.

The City opposes our proposal for temporary occupancy of the space to provide relief to our member organizations with expiring leases – despite granting Urbancorp permission to use it as an office.

The City brought its own motion to permanently extinguish TMAC’s right to own or occupy the Space. In an affidavit sworn in support of that motion, one of the City’s decision-makers swore that City staff “were, and still are, of the view that TMAC is still not a viable group to operate the Combined Arts and Culture Space successfully.”

TMAC is invited to support the City of Toronto’s bid to designate Toronto as a UNESCO Creative City in Media Arts; four representatives attend consultation. The bid is won in October 2017

Urbancorp moves office in to TMAC

The City has given Urbancorp the thumbs-up to move in to an office on the 3rd floor of TMAC – originally intended to be the Images Festival office. This space is restricted to arts and culture use under the land-use agreement, yet a bankrupt developer is allowed to use it to carry out the restructuring of its business while TMAC and its members are blocked from occupying the space.

Mediation begins, and all parties engage in a negotiation process

City holds a public consultation , signalling its intent to move forward with an RFP process, despite a legal action by TMAC asserting its rights to the space.

A “raucous” community consultation attended by 255+ community members, plus local and national news media, sends a clear message to the City: The community wants TMAC in its space.

Watch a short video of the meeting

TMAC files a statement of claim against Urbancorp and the City of Toronto for specific performance of the APS, requiring Urbancorp to complete the sale.

TMAC delivers all closing documents; Urbancorp refuses to close due to the City’s interference.

The Condominium is registered

City directs Urbancorp not to close the transaction with TMAC

City directs Urbancorp not to complete sale, despite facility being “substantially completed” for occupancy and subsequently registered.

Councillor says she will "terminate" APS

At a meeting between TMAC and Councillor Ana Bailao, the councillor stated that she would stop the transaction and that the “deal is over” – and asked that TMAC sign over its rights to the space to Artscape

Urbancorp, TMAC and the City finalize Agreement of Purchase and Sale

TMAC designs the facility, investing close to $1m in public funds and thousands of volunteer hours into overseeing the build over 3 years. 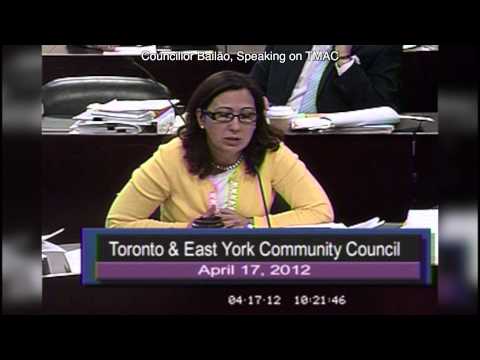